This website is maintained by Larry D. Smith, historian, registrar and newsletter editor for the Frontier Patriots Chapter, SAR, (and a devoted native son of Mother Bedford).

There are currently over 3,000 pages on this website. Please take your time to look around. I hope you enjoy your visit today, and that you will come back in the future (I'm constantly adding to the site).

Much of the information presented in this website is excerpted from the books, Mother Bedford And The American Revolutionary War, and 150th Anniversary History Of Blair County, Pennsylvania, published by Closson Press. If you are interested in history and want to purchase books on history, please visit their website at (www.clossonpress.com).

This site should be able to be viewed equally well with Internet Explorer, Mozilla Foxfire, Google Chrome, Safari, Opera, Maxthon Cloud, Torch, Avant and SeaMonkey. Note: Certain of the "powder horn" icons provide live links to additional pages. When you hover your cursor over an icon or button, if it changes from an arrow to a pointing finger hand, it is a live link to another page.

May 2022 Note: This website was created twenty-three years ago (1999), and although having since been updated to newer html and css standards, its pages were not made 'responsive' and capable of reducing down to accommodate being read on cellphones due to my busy schedule. For the past seven years I was writing a book (Bedford County, Pennsylvania ~ Two and One-Half Centuries in the Making) and chaired the Sestercentennial (250th) Anniversary of Bedford County, Pennsylvania for 2021. With the conclusion of the Sestercentennial activities at the end of 2021, I can now foresee being able to update this website. Your patience is requested while the changes are being made.

The pages of the MotherBedford website are available on DVD so that you can visit the website offline on your computer. Click on the icon to the left for information on how to purchase one.

Mother Bedford refers to a part of the region in south-central Pennsylvania which was erected as a county on 09 March 1771 out of lands obtained by treaty from the Indians in 1754 and 1768. The region had originally been formed as Barree, Bedford, Colerain and Cumberland Valley Townships within Cumberland County (in 1767).

In 1773 the county of Westmoreland was erected out of the western half of Bedford. The county which retained the name of ‘Bedford’ was left with the region encompasssed by present-day Huntingdon, Fulton, Blair, Bedford, Cambria and Somerset counties. It is that region that is Mother Bedford.

The Engagement Of Frankstown

The Massacre Of Philips' Rangers

The Tory Expedition To Kittanning

The Jersey And Other Horrors ~ British Prison Ships

The Articles Of Association

Rosters Of Patriots Of The American Revolutionary War From Bedford County

A Chronology Of The American Revolutionary War

The Attempt To Win Over The Hessians

The Mutiny Of The Pennsylvania Line

The Pox: Ten Times More Terrible Than Britons, Canadians And Indians Together

Cannon: A Review Of Artillery Of The American Revolutionary War

Documents Of Bedford County During The American Revolutionary War

Historical Documents Of The United States Of America

The Time That Has Elapsed Since Certain Revolutionary War Events Occurred

This website is dedicated to the memory of the native sons
of Mother Bedford
who embraced the Patriot Cause
during the American Revolutionary War,
and to the memory
of those Patriots who chose to reside
in Bedford County following the War.

The Early Settlers
of Mother Bedford

The Lineage Of Mother Bedford

The Indian Occupation Of Mother Bedford

Maps Revealing The Formation Of The Townships Of Bedford County

The Tax Assessments Of Bedford County During The American Revolutionary War

The Coming Of The Euro-Americans

The Celebration Of Christmas

The Holidays Celebrated In Colonial America

The Occupations, Professions & Offices Of Our Colonial Ancestors

Patriotism and How
The American Revolutionary War
Affected Mother Bedford

Who Were The Pioneers Of Bedford County Who Became Americans In The Revolutionary War?

The Declaration Of Independence

The Sons Of Liberty & Committees Of Correspondence

George Washington: A Memorial On The Eve Of The 200th Anniversary Of his Death

The Presidency ~ Prior To, & Including, Washington

A History Of Clan Muirhead

A Genealogical Book Of Hours

The Sesquicentennial Of Blair County

Deciphering All The Cousins

Alchemy ~ and other metaphysical studies

Follow this link to the personal home page of Larry Smith (where you'll find links to genealogical information.)

Follow this link to the "Lineages Of Larry D. Smith" main page, which includes various ancestral lines, including that of Muirhead, Shaw, & Walter.

Follow this link to the personal home page of Larry Smith's parents, the Bernard Smith Family. 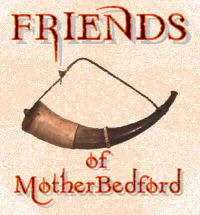 Note: The majority of the text used throughout this website has been excerpted from the book, Mother Bedford And The American Revolutionary War, Published by the Closson Press and Copyright ã 1999 by Larry D. Smith. All rights reserved.

Additional information has been excerpted from other published books by the webmaster. All information contained on the pages of this website has been copyrighted by Larry D. Smith in one book or another. Please e-mail the webmaster if you wish to copy and utilize the information found here for your own publications and/or website.